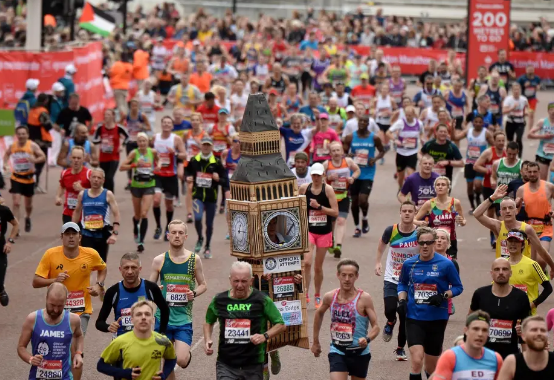 Boston Marathon – The oldest running race in the world

Boston is the oldest marathon in the world, starting in 1897. Regularly Monday of the third week in April each year, Boston Marathon will take place. And the tickets to this tournament in 2020 have been sold out completely. Bostom Marathon attracts more than 500,000 followers every time it organizes.

In 1996, the race set a world record with more than 38,708 participants, 36,748 people starting, and 35,868 people completing the distance. More than a decade ago, but the running spirit is so strong, this is an unimaginable number, you understand?

Starting in 1981, the London Marathon has grown its reputation to global scale and set many different records. The race was founded by former Olympic champion Chris Brasher and athlete John Disley. In 2016, Virgin Money London Marathon had 247,069 participants register to try their luck. (Originally entered the ballot). And only about 38,000 runners are eligible to participate in this run on the last Sunday of April each year.

The London Marathon can be called the hardest and most unlucky race. Even if you are a qualified runners to join, but you are unlucky to lose. Perhaps there is no run that you pray for good luck to your team as much as this.

Berlin Marathon – The run of the world record

Berlin Marathon started in Grunewald Forest in 1974. Then moved to West Berlin in 1981. In 2018, the World Record was broken in Berlin by Kenyan runner – Eliud Kipchoge with a time of 2:01:39. This year, because you’re busy breaking records in London, you don’t see Eliud Kipchoge in the top list of 2019.

How to join Berlin is quite fair. You qualify, you have the right to participate. You are not qualified, the same law, please rely on your luck. And after you have a ticket to take part in this tournament, you must accompany 40,000 runners from different countries to compete for yourself.

Chicago Marathon – A stepping stone for the New York Marathon

The Chicago Marathon takes place for the first time in 1977 – the Sunday during the annual Columbus week, which usually falls in the middle of the month. The number of participants increased steadily year by year